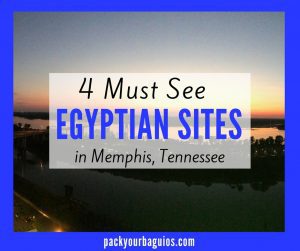 Do you love Egyptian architecture and artifacts but don’t want to make the trip all the way to Egypt?  Then you should visit Memphis, Tennessee!  Many people know that Memphis is famous for its Civil Rights history, its music, and its BBQ (see 3 Days in Memphis and The Ultimate Memphis Barbecue Guide).  But what a lot of people don’t know is that Memphis also has quite the history of Egyptomania, or the obsession with all things Egyptian.

Memphis’ obsession with Egypt dates all the way back to its naming.  Some time between 1818 and 1820, General James Winchester named Memphis after the ancient city of Memphis, Egypt.  Many other towns along the Mississippi River (or the American Nile) were also named after Egyptian cities such as Cairo, Alexandria, Karnak, and Thebes.  As a result of its namesake, Memphis has many fascinating Egyptian sites you can still see today.

The Ballard & Ballard Co. Obelisk Flour Building is the last thing you expect to find in downtown Memphis. Located between Riverside Drive and Front Street, this obelisk covered building is about halfway between the Orpheum Theater and the National Civil Rights Museum. The façade features hieroglyphics (that are nonsense), sphinxes, camels, and more. The flour company was owned by 2 brothers.  One of the brothers, Samual Thruston Ballard, was so obsessed with Egypt that in 1904,  he actually bought a mummy.  Ballard & Ballard distributed Obelisk Flour, which is what inspired the building’s design. The building currently houses H&S Printing. 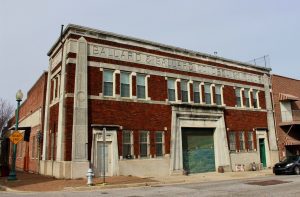 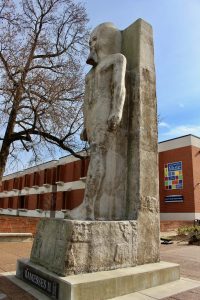 Ramses Statue at the University of Memphis

2.  Egyptian Gallery and Ramses Statue at the University of Memphis

The University of Memphis has a free art museum on campus.  The Institute of Egyptian Art & Archaeology at UofM maintains an Egyptian artifact collection within the art museum.  The collection features over 250 objects on permanent display, including real mummies!  The gallery is currently closed for renovations but will reopen February 2018.

Outside the Theater and Music buildings on campus, right off Central Avenue, there is an exact replica of a statue of Ramesses II.  This statue was originally created for the Memphis Pyramid.  However, after the Pyramid was turned into a Bass Pro Shop, the statue did not seem appropriate. So, it was moved to the University of Memphis. This statue, which was created with the permission of the Egyptian government, looms quite impressively over the area at a height of 25 feet.

3.  Egyptian Pylon Entrance at the Memphis Zoo and Aquarium

The pylon entrance to the Memphis Zoo and Aquarium, constructed in 1990-91, bears possibly the first phonetic, legible renderings of hieroglyphics, containing words such as “kangaroo” and “shark.”  This legibility differs from other Egyptianizing animal pavilions in Antwerp, Berlin, and Detroit precisely because of the legibility of hieroglyphics.

Just like the Ballard & Ballard Obelisk Flour Building, the hieroglyphics at these other zoos are complete nonsense.  In front of the entrance are rows of animal sculptures that are lined up to resemble the Avenue of Sphinxes in Egypt.  Once you enter the zoo, two more buildings flank you that are designed in the style of Egyptian temples. In the center of the plaza stands an obelisk. 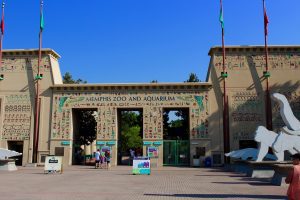 At 321 feet, the Pyramid is a 60% scale of the Great Pyramid of Giza, making it the 10th tallest pyramid in the world and the 2nd tallest in the United States. It was built in 1991 to be a much needed monument for the city of Memphis. Unfortunately, the Pyramid seemed to be cursed with bad luck and it closed in 2005. It stood empty until Bass Pro Shops negotiated with Memphis and signed a 55-year-lease for the building. It opened to the public in April 2015.

Inside the Pyramid is a 28-story-tall freestanding elevator that is the tallest freestanding elevator in the Western hemisphere, if not the world. For $10, you can ride all the way to the top of the Pyramid to get an unbelievable view of Memphis and the Mississippi River. Despite the Bass Pro Shop located just inside, these balconies are actually pretty romantic spots. I personally have gone on a date there and witnessed two proposals. 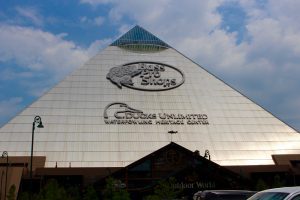 Have you been to or seen any interesting “Egyptian” buildings? What do you think about American cities and companies using ancient Egyptian designs? Please Share by commenting below! 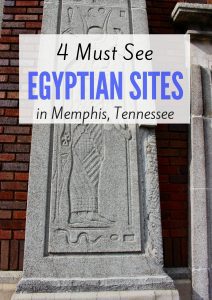