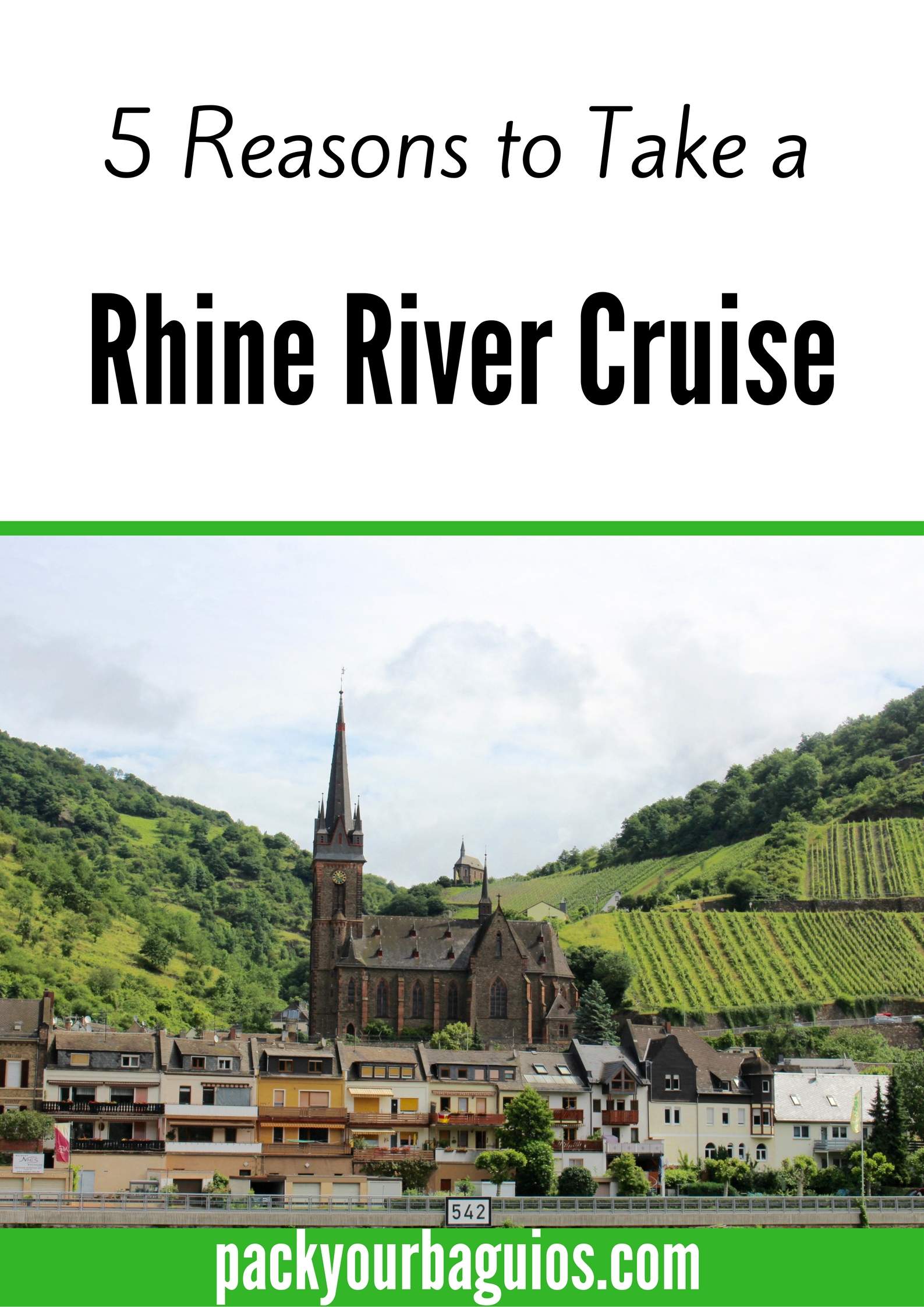 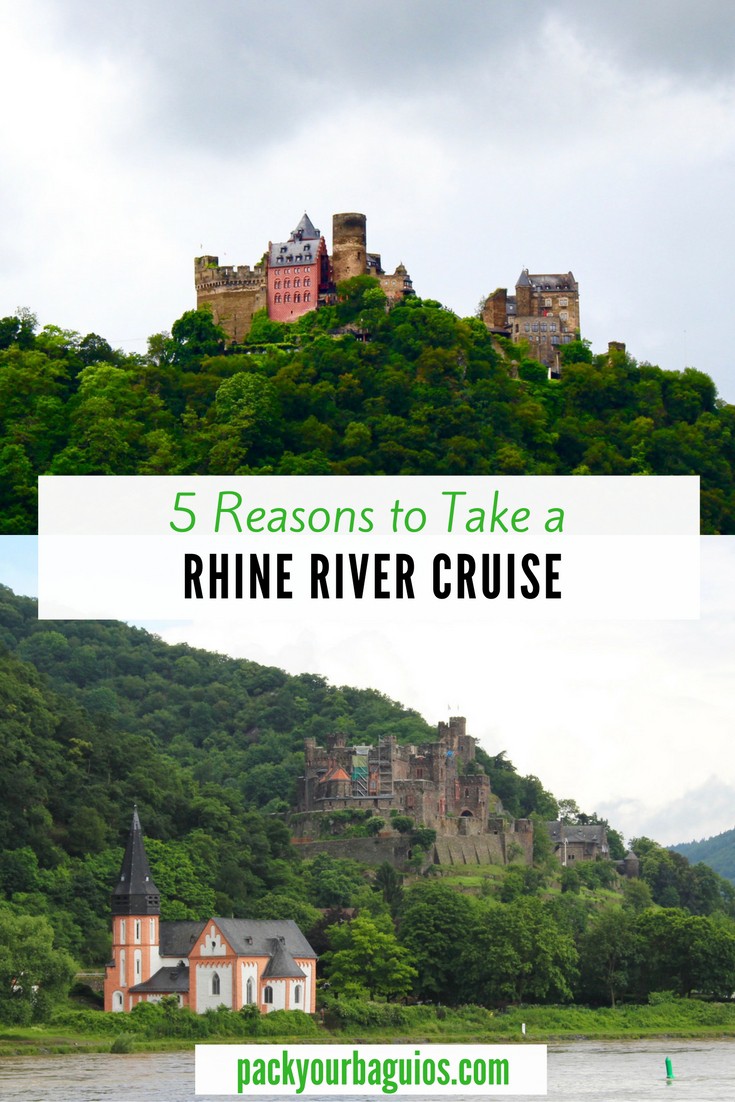 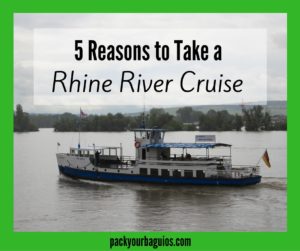 “Rhine” is a Celtic word that roughly means “to flow”.  Along with the Danube River, the Rhine River forms the northern border of the former Roman Empire.  The Rhine is Europe’s most important inland waterway and longest rivers.  With its location hosting some of Europe’s most picturesque cities and fairytale castles, the section of the Rhine from Mainz to Cologne was declared a UNESCO World Heritage site in 2002.  A great way to see all of these castles is by taking a Rhine River Cruise! By this time in our trip of Bavaria, we were very tired!

Some in our group even went home after Stop #7–Heidelberg.  However, Joe and I have the travel philosophy of “We might not ever get to come back”.  So since we were already in Germany,  by golly, we were going to stick around to see all of the wonderful landscape along the Rhine River.  I’m so glad we took a Rhine River Cruise for these 5 reasons: 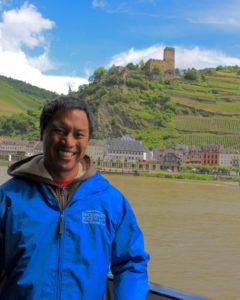 Just cruising down the river, giving our feet a rest!

This is a great trip to take at the end of your vacation, when your feet are throbbing and your body is crying out for a break.  You get to see all kinds of amazing castles without walking anywhere!  We saw castle after castle, with my feet propped up and a drink in my hand.  On our cruise day, it was raining (the theme of this entire trip), but I was still able to take plenty of pictures and stay dry in the process.  Yay for big picture windows!

At most of our other stops there were one or two large architectural sites, a cathedral here, a castle there.  On the Rhine River cruise we passed 25+ castles, and we didn’t even take the entire cruise.  We boarded at Rudesheim and departed at Koblenz.  There were so many castles, it was easy to lose track of which one we were passing.  Fortunately, I had bought a map of the river that detailed each landmark along the route along with a little narrative about each. 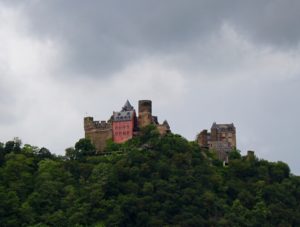 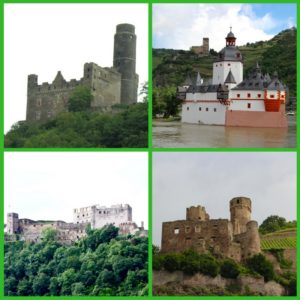 We passed over 25 castles on our route! 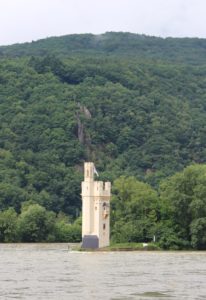 Don’t get thrown into the Mouse Tower!

3.  You get to learn lots of history trivia!

As a history teacher, of course I’m going to be all over the history around every bend in the river.  The narrative given by the ship was pretty informative, but my little map purchase (5 Euros) gave us even more historic and geographic details!

My favorite was the story of the Mouse Tower.  Originally a customs tower, it stands on an tiny island in the middle of the Rhine River.  Legend tells the story of a tight-fisted Bishop who was thrown into the tower as a punishment for his wickedness.  He was allegedly eaten alive by mice (hence the name of the tower)!

4.  You’ll see some of the most picturesque towns in all Europe.

Before taking this cruise, I don’t know why I thought it would be just random castles here and there.  Duh!  Castles were built to protect towns people!  Towns people had to live somewhere, right?  As our boat floated by each little city, I loved seeing the different cathedrals and colorful shops lining the riverbank.  At the bigger cities, we would dock with some travelers getting off and new people getting on.  All of the towns were so pretty, I was really tempted to get off the boat and explore.  Then again, I was enjoying having a morning off of my feet! 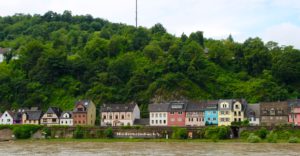 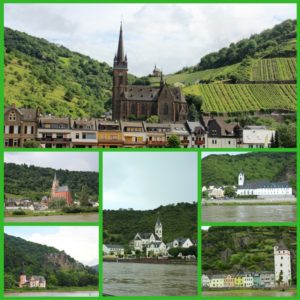 Those of you that know us personally understand why this is the most important reason for the Baguios.  We love to cook and eat all kinds of food!  Our cruise ship had a full-scale restaurant on the bottom deck and a bar on the top.  Although we weren’t hungry enough for a full meal, the desserts were just too tempting to resist.  It was also rainy and cold on the upper deck, so being able to go up to the bar and get a rich cup of coffee was super convenient. 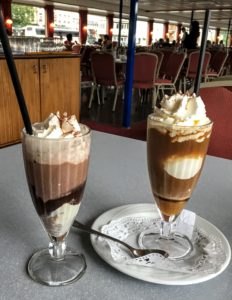 Delicious desserts is always a good reason to take a cruise!

We enjoyed going down the Rhine River so much, we want to take some longer river cruises. Even the new cruises going down the Mississippi River seem like a lot of fun!

Pin it for later! 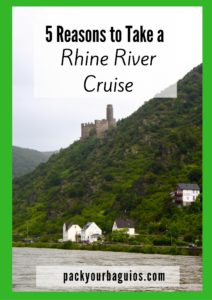