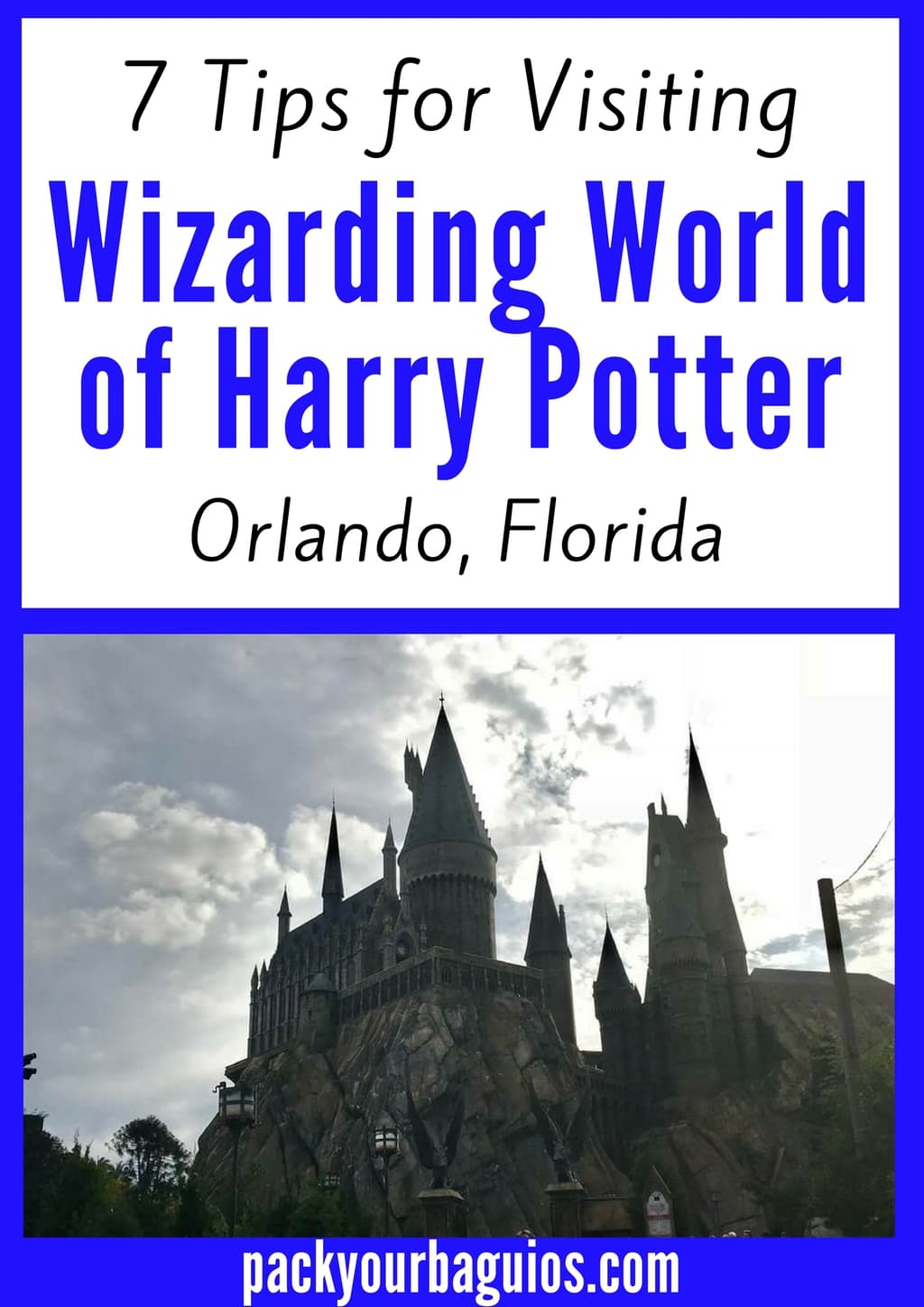 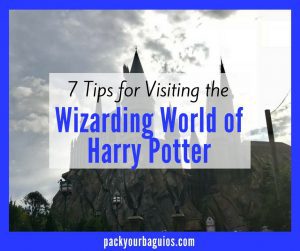 I have been a Harry Potter fan for quite a long time. I remember watching the first scene of Harry Potter and the Sorcerer’s Stone as a kid and being so enchanted.  As a result, I became a lifelong fan, reading all the books (having to wait much too long for the last two books to come out) and watching all the movies.  Before the seventh book came out, I read the previous six books in a three day period to prepare myself.  The first ever midnight premier I went to was Harry Potter and the Deathly Hallows-Part 1.  I tell you all this to show just how excited I was when my roommates suggested we go to Universal Studios: Wizarding World of Harry Potter as a weekend trip. 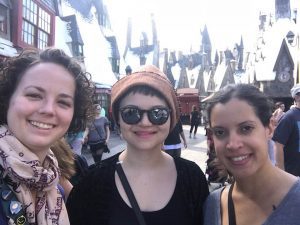 My roommates and me!

1.  Rewatch the movies before your visit.

I had been to Universal Studios before, but when I last went, only Hogsmeade had been built.  Now, the Harry Potter sections of the parks are twice the size.  In preparation for our trip to Harry Potter World (as we like to call it), my roommates and I spent the weekend before completing a Harry Potter movie marathon: 8 movies in 2 days.  We’re nerds, I know.

2.  Watch the show at Ollivander’s.

Something that you absolutely have to do if you are a Harry Potter fan is watch the show at Ollivander’s. One person from the crowd gets chosen by the wand keeper, and that person gets a wand chosen for them for the show, just like how Harry got his first wand.

Afterwards, they lead you to the shop where you can buy your own wand. There are 12 wands that you can choose from that do not belong to any movie characters. But there are also character wands that are too numerous to count. So there is quite a variety to choose from.  I bought Professor McGonagall’s wand. You have the option for each wand to get it interactive or not. Interactive versions are distinguished by a gold label instead of silver. Normal wands cost $44 while interactive cost $50. 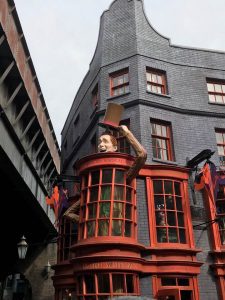 The extra $6 for being able to use your wand is definitely worth it.  All around Hogsmeade and Diagon Alley, there are locations marked by metal plates on the ground.  You wave your wand according to the directions on the marker and something will happen.  For example, you can “swish and flick” your wand at a feather while saying “wingardium leviosa,” and the feather will start floating in the air!

Saying the spell isn’t necessary, but helps you get into the world.  The trick to making it work is finding out where the sensor is for each location and making sure the tip of your wand is in front of the sensor.  For some of the window locations, you might have to get closer to the glass so the wooden window panes don’t block your wand.  There is usually a Universal Studios staff member nearby that can help you if you are stuck.  And if your wand isn’t working at any point, you can take it to either Ollivander’s location and they will repair it for free!

4.  Stay at a Universal Resort.

To get from Hogsmeade to Diagon Alley, you can take the Hogwarts Express, which usually has a pretty short wait, but in order to switch parks, you will have to have a park-to-park pass. So keep that in mind when purchasing tickets. The rides in Harry Potter World are all great fun but can have long wait times. I would recommend staying at a Universal Resort like we did. When you stay in a resort, you can enter Islands of Adventure an hour early at 8:00. 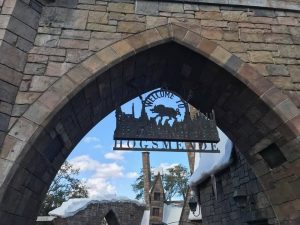 To get from Hogsmeade to Diagon Alley, you can take the Hogwarts Express. 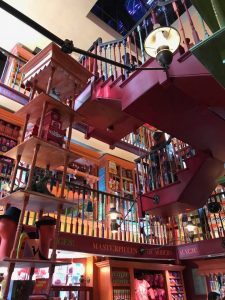 Because we knew about the long wait times, we rode the Hogwarts ride first in Hogsmeade (located in Islands of Adventure) and watched a few shows.  Then, as soon as Universal Studios opened at 9, we were in line for the Hogwarts Express to go to Diagon Alley.

After we rode the two major rides, we spent the remainder of our time watching the various shows that rotate every hour, eating at the Leaky Cauldron, and walking through all the shops, geeking out.  It was hard to restrain ourselves from buying all the Harry Potter merchandise that we saw, not that we put in much effort. 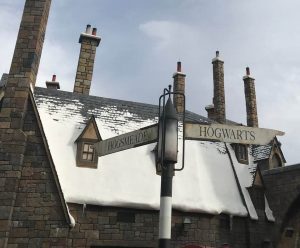 Both Hogsmeade and Diagon Alley are so well built that you really feel like you were dropped in the world of Harry Potter.  At the top of the Gringotts building, there is even the dragon from the movie.  If you want to get a picture of the dragon breathing fire, have your camera ready and listen for it to growl.  The dragon will growl right before breathing fire. 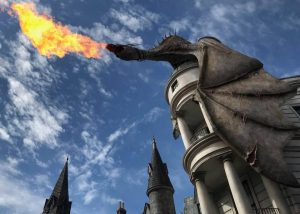 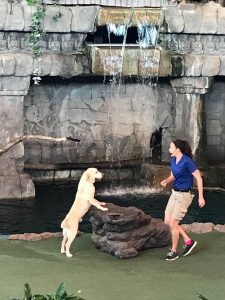 Check out the “Animal Actors on Location” show.

6.  Skip the main Universal Studios park (if you’re wanting to just have a Harry Potter weekend).

Compared to Harry Potter World, Universal Studios is actually quite sad looking.  There are 2 parks.  Islands of Adventures is definitely the better of the two, in my opinion.  The themes are distinct from each other, and you really feel like you are in a theme park.  The main Universal Studios park in comparison lacks a theme and seems a little outdated.

Since we were just going for the Harry Potter stuff, we avoided the main park altogether.  Two things I can recommend are the Animal Actors on Location (a pet show) and Poseidon’s Fury.  The pet show is adorable, and afterwards, you can pet the dog actors.  All the animals are rescues.  Poseidon’s Fury is so lame that it is amazing.  It is a walkthrough show with lots of special effects.  Be warned if you have little ones, there are times when it goes completely pitch black.

I know it has nothing to do with Harry Potter, but you must eat at Mythos, a Mediterranean-themed restaurant that has won Theme Park Insider’s Award for World’s Best Theme Park Restraurant six times!  We were not disappointed.  A little pricey, but expected since it is theme park food.  Our food, though, was delicious.

Overall, my roommates and I had an amazing weekend in the Wizarding World of Harry Potter. I’m glad we went while we had the opportunity, and I hope I can go back soon!

Any other Harry Potter fans out there?  Please give us a shout and let us know your favorite movie or book! 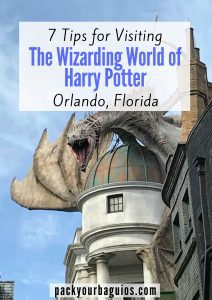