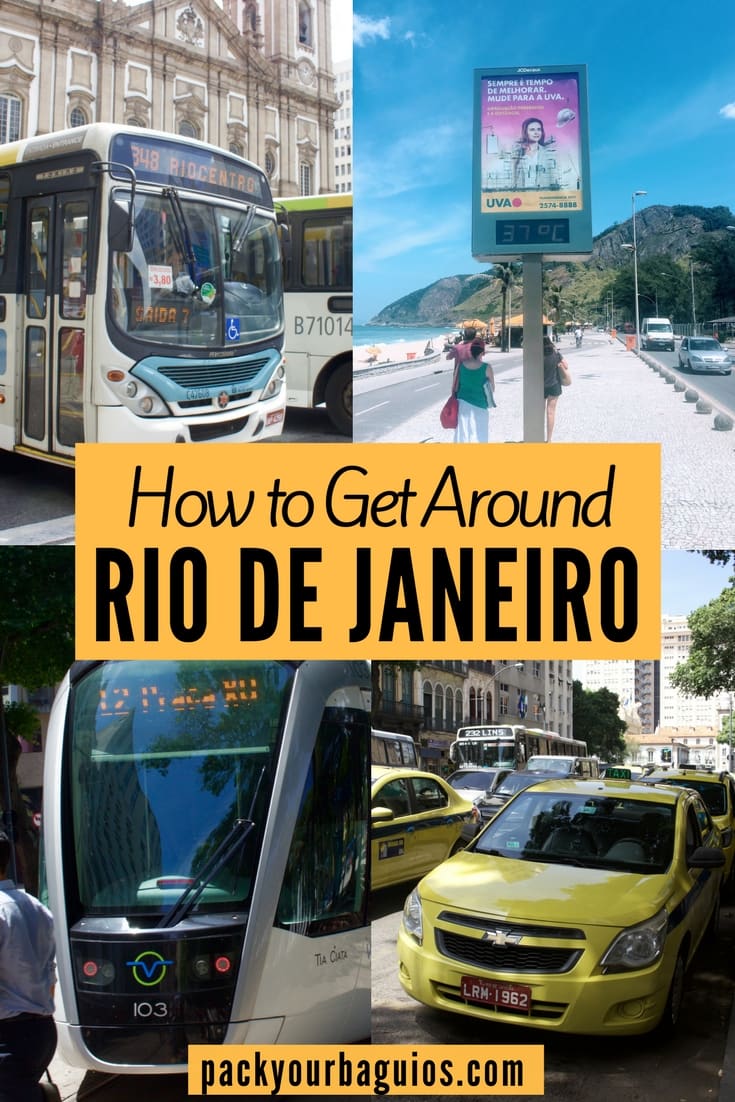 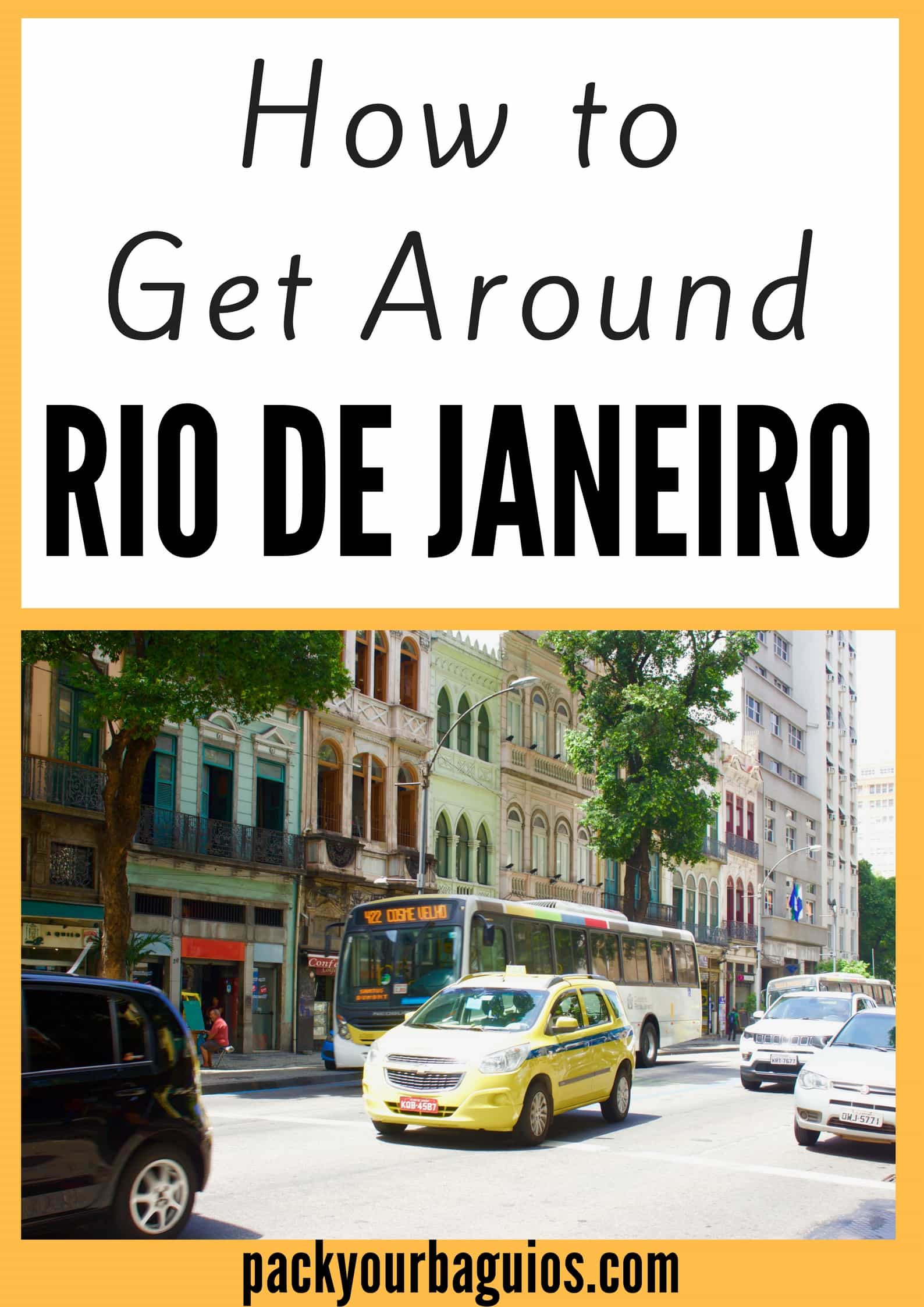 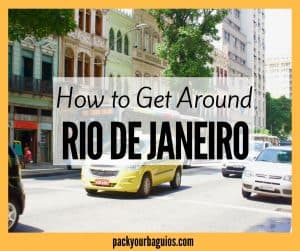 Rio de Janeiro is one of the the biggest cities in South America and the biggest tourist destination in Brazil.  Whether you’re coming for its beaches, Carnival, or seeing the Christ statue in person, following these transportation tips will help make your trip as smooth as possible.

8 Must Sees in Rio

Everything About Rio’s Beaches

Traveling by foot is the easiest way to go short distances quickly in Rio.  It can also be the most dangerous.  Cars have the right of way at all times and everywhere.  A car may stop at a crosswalk if they are already stopped at a red light, but once that light turns green–RUN!  Even if a car stops at the crosswalk, pedestrians should be on the lookout for motorcycles.  Motorcycles weave in and out of cars at high speeds and rarely stop anywhere.

Renting a Car in Rio

I’ve decided that you need to have a death wish to try driving a car in Rio unless you have experienced the craziness since birth.  The street signs can be extremely confusing, and drivers need to be on constant lookout for motorcyclists weaving in and out.  The friend we stayed with had her car’s side mirror knocked off three times by motorcycles whizzing by.

If you insist on driving be aware that parking is rarely free.  Finding parking garages in shopping centers is a safe bet.  On the street, if a person “helps” you find a space, plan on paying them around R$2 to watch your car.  If you don’t pay, you may or may not have a car waiting for you when you return.

Taxis in Rio de Janeiro are cheap and plentiful.  They are the most popular way for tourists to get around the city.  There are actually more yellow taxis in Rio than in New York City.  Most taxis are metered and rates are 50-70% cheaper than in Europe or North America.  A twenty minute ride around the city will run you around $6 US.

When starting a ride, make sure the meter is cleared and is set to “tariff 1” which starts rides at R$5.20 then adds R$2.05 per kilometer.  From 11 pm-6 am weekdays, Sundays, and in December taxis are allowed to charge “tariff 2” rates, which runs R$2.50 per kilometer.  Be prepared.  Most drivers only speak Portuguese.  Have your destination written down to avoid confusion.

Flat rates are only permitted for radio taxis or cooperatives at airports and bus stations.  Rates are higher than metered taxis, but you’ll know what your final ride cost will be.

Uber is becoming increasingly popular.  So much so that when we were visiting, the taxi drivers were threatening to strike.  Uber is cheaper than hailing a taxi.  The downside is that Uber can’t be taken to or from the airport. 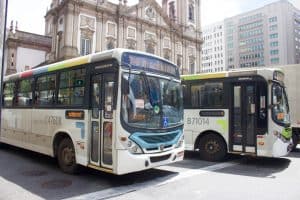 City buses are the cheapest way to get around the city.  With over 1,000 routes and four different bus companies, there’s pretty much a bus that goes to every part of the city.  However, the routes can be extremely confusing and slow, especially during rush hour when Rio traffic snarls to a stop.

Buses display their destination in their front window.  You can pay for your fare (R$2.50-R$3.80) at the front or buy a digital fare card which can also be used on the metro.  Buses do not stop at bus stops unless hailed by sticking your arm out.  When you need to get off, signal the driver to stop.

Of all the forms of public transportation, the buses tend to have the most crime, mainly pickpockets on crowded buses.  Just hold on tight to valuables.  Tourists should avoid using the bus at night.

Known as a ferry service, minibuses run one way along Av Rio Branco to the Zona Sul as far as Barra da Tijuca.  The return route runs along the coast.  They are an alternative to the city buses, especially for beach hopping.  Many are not licensed, so their use is not recommended for tourists.   Minivans can be quite crowded, so avoid using them if you have any luggage.  The rates range between R$2.50 and R$5.  Yell for the driver to stop when you need to disembark.

One of the safest forms of public transportation in Rio is the subway.  It is much faster and reliable than the bus system but is fairly small and limited.  Trains operate from 5 a.m. until midnight Monday through Saturday and 7 a.m. until 11 p.m. Sundays and holidays.  During Carnival, the metro runs nonstop.  One way fares are R$4.30.  There are more lines scheduled to be added. 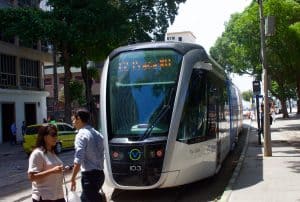 You can thank the 2016 Olympics for this new addition to Rio’s public transportation.  Currently, there is only one line available with two more lines planned for completion in 2018.  Running from Santos Dumont Airport, the line currently terminates at Novo Rio Bus station and has twenty stops.  Trains run every eight to twenty minutes depending on the time of the day.  Fares are R$3.80 (same as city buses).

So are you comfortable using public transportation when you travel?  Any tips?  Please share by commenting below!  Any questions?  Please ask! 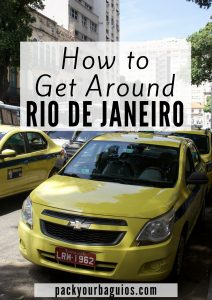