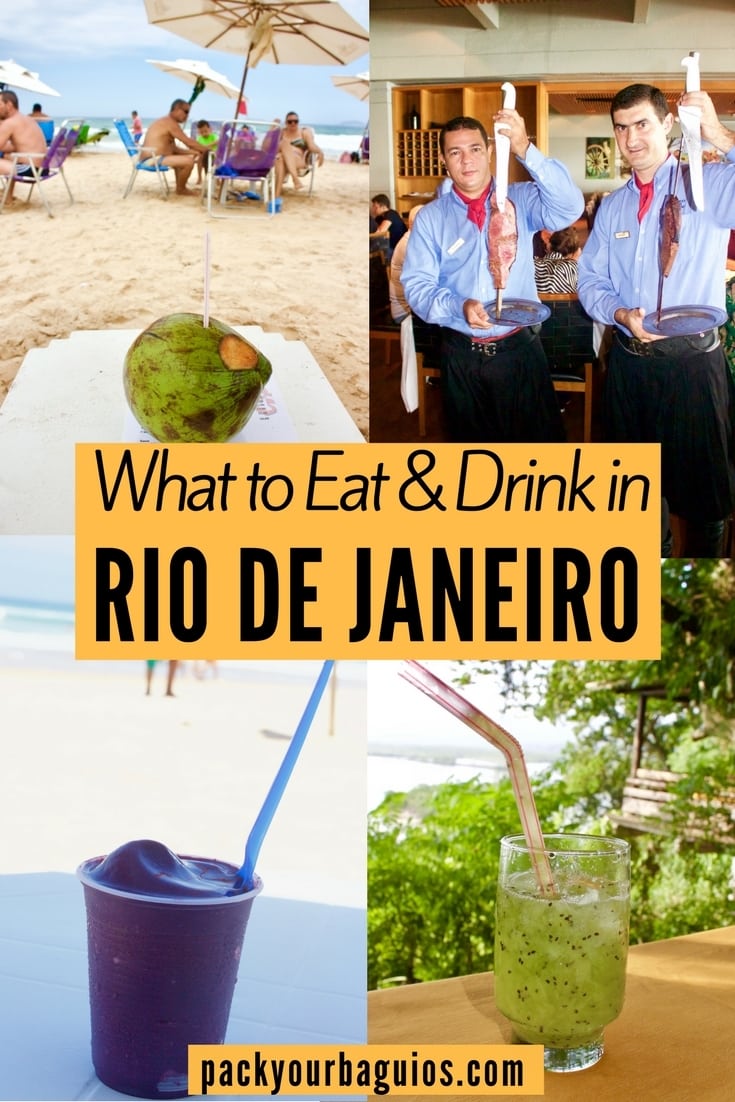 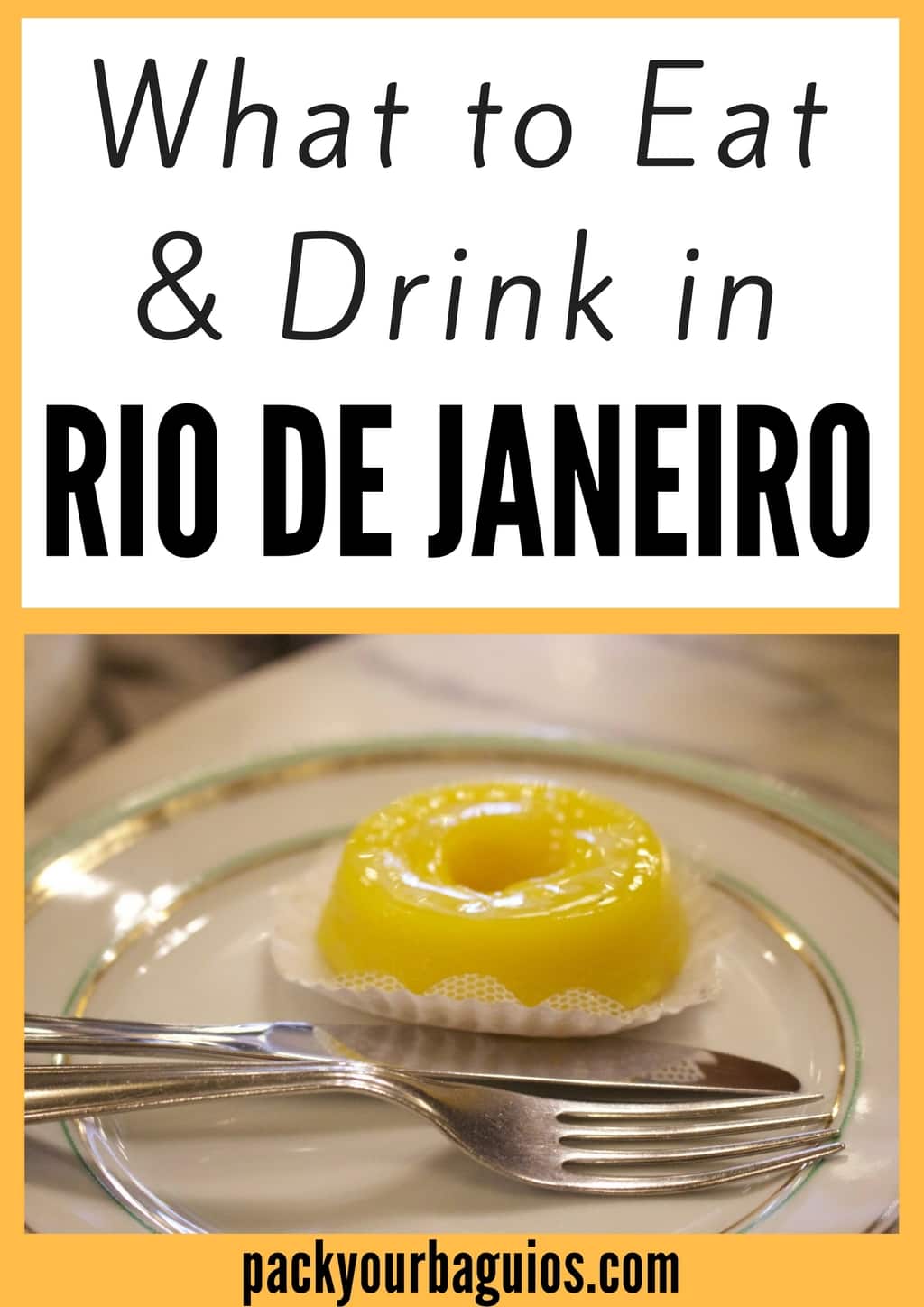 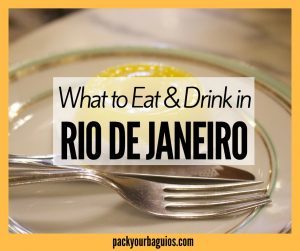 Food is an essential part of the Brazilian culture.  With a mix of African, European, and Amerindian ancestors, the food in Brazil ranges from world-renowned steakhouses to beach street food.  During our recent visit to Rio de Janeiro, we had the advantage of having a local give us tips and recommendations of what to eat and drink that we just had to try!

Everything about Rio’s Beaches

What to Eat in Rio de Janeiro- Main Meals 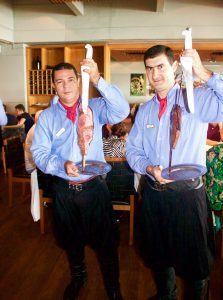 How much meat can you eat?

Steak at a Churrascaria Rodizio

When my Brazilian friend, Aline suggested that we try a Churrascaria (barbecue) Rodizio (all-you-can- eat), I questioned her to whether or not it was a traditional Brazilian place to eat.  There’s a Brazilian steakhouse where we live in Memphis, and I always assumed it wasn’t authentic, like the food served at Outback Steakhouse.

I was assured that Brazilians love going to a churrascaria rodiazio.   It goes along with the Sunday afternoon barbecues that are also a tradition.  If you’ve never been to a Brazilian steakhouse, the waiters go around with different types of meat on skewers.  You have a card with a red side and a green side.  When you want more meat, flip the card over to green.  If a waiter stops by, and you don’t want what he has on his skewer, just say no.

The importance of fish in the Brazilian diet comes from its Portuguese influence.  Pretty much every restaurant will have some type of fish dish.  I think I had at least one meal that included shrimp every other day of our visit! 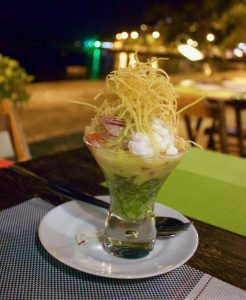 Moqueca de camarão is a dish that was shaped by the mixing of African and Amerindian cultures.  It is a staple dish in the northeastern part of Brazil.  Coconut milk combined with strong spices give the stew its thick orangish color.  It is usually served piping hot in a huge bowl that is meant to be shared. 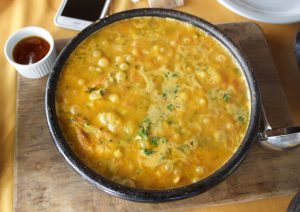 This bubbling bowl fed four of us with some left over.

Black beans and rice are a staple in Brazilian homes and restaurants.  Think mashed potatoes for American meals.  When we were in Brazil, the only time we didn’t have beans and rice was at breakfast and when we were eating on the beach.  If the beans have meat mixed in it, it is called feijoada.  Feijoada is considered the national dish of Brazil. 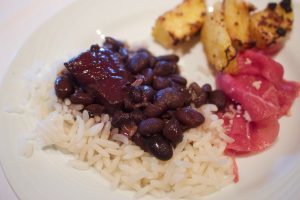 The national dish of Brazil- Feijoada (beans with meat)

Commonly offered next to the beans and rice is farofa, a flour made from the root of the manioc flower.  Farofa looks a lot like sand, and the consistency ranges from larger grains to a finer powder.    Although it can be eaten as a side with a main dish, it is usually sprinkled on or mixed in other foods.  I loved it mixed with my beans and rice! 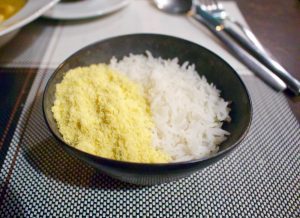 Mix farofa with other foods or eat by itself.

What to Eat in Rio de Janeiro- Beach Food

Commonly sold on the beach and street stands is pastel, a fried pie typically filled with cheese, shrimp or beef.  You can find pastel sold as appetizers in restaurants, in beach stands, and by strolling beach vendors. 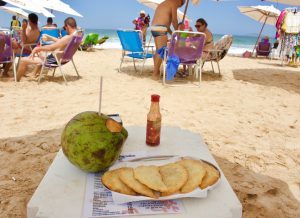 Queijo coalho is a fast snack that you’ll find on many Brazilian beaches and is soooo good.  The cheese is heated in homemade grills then sprinkled with oregano or other spices.  It doesn’t melt much, but the grilling gives it some texture.

Açaí is a made from the fruit of a particular type of palm tree native to Central and South America.  It is a dark purple color, and the consistency is similar to a slurpee.  It is served very cold.  You will find açaí stands on street corners and being sold in carts on the beach.  It has become very popular with surfers and other athletics looking for a quick, healthy boast of energy.  Most vendors will give you the option of different ingredients to sprinkle on top.

We found empadas being sold by beach vendors and as appetizers in restaurants.  An empada is like a little meat pie, similar to a pastel, but baked instead of fried.  The most common filling is chicken, but I like the ones filled with shrimp (camarão). 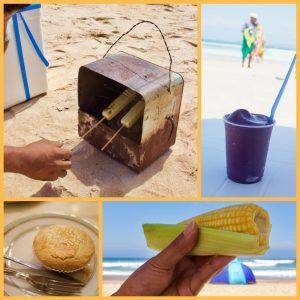 Queijo coalho (grilled cheese on a stick), cold cup of Açaí, empada, and hot corn on the cob

Like many of Brazil’s traditional foods, pão de queijo originated from African slaves.  It has many different versions, but most varieties contain cassava flour mixed in a ball with various cheese.  Unlike “stuffed bread”, the cheese is mixed with the flour.  It is light with pockets of air inside.  It is sold in grocery stores, bakeries, as appetizers in restaurants, and on the beach, with vendors carrying the pão de queijo in heat retaining boxes.  It is utterly delicious, and I could eat the little bites of heaven every single day! 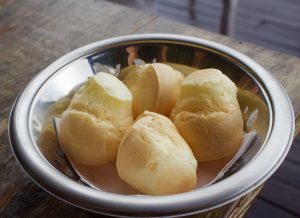 Globo Biscoitos are a beloved beach snack that has been around for the last 50 years.  The little bags contain circle-shaped puffed chips which are primarily tasteless.  Brazilians love this iconic snack so much that when a New York Times reporter criticized the snack during the 2016 Olympics, he became the target of a Twitter attack from thousands of upset Brazilians. 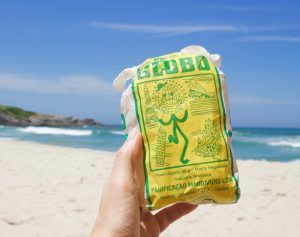 What to Drink in Rio de Janeiro

Joe drank this every chance he got.

Guaraná is a guarana-flavoured soft drink.  Guarana is a climbing plant in the maple family.  The flavoring from the plant is slightly apple-flavored, and the soda looks a lot like ice tea.  It is Brazil’s #1 soda and comes in cans and 2-liter bottles.

Caldo de cana (also called garapa) is literally “sugar juice.”  Made by pressing sugarcane through a press, the juice extracted is a greenish-yellow.   It is available everywhere.  What you end up with is 40%-50% sugar.  Trust me, a little bit goes a long way! 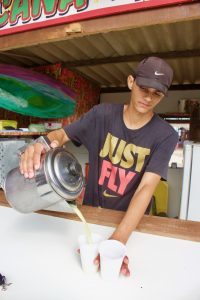 Caipirinha is Brazil’s national cocktail.  Made with cachaça (sugarcane liquor), lime, and sugar.  Fruit and sugar are muddled together, then the alcohol is added.  Other fruits sometimes used include passion fruit, kiwi, and mango. 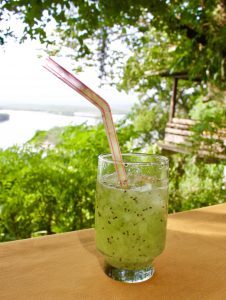 Which of these foods and drinks would you want to try?  Please share by commenting below!  Any questions?  Please ask! 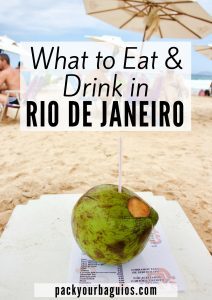