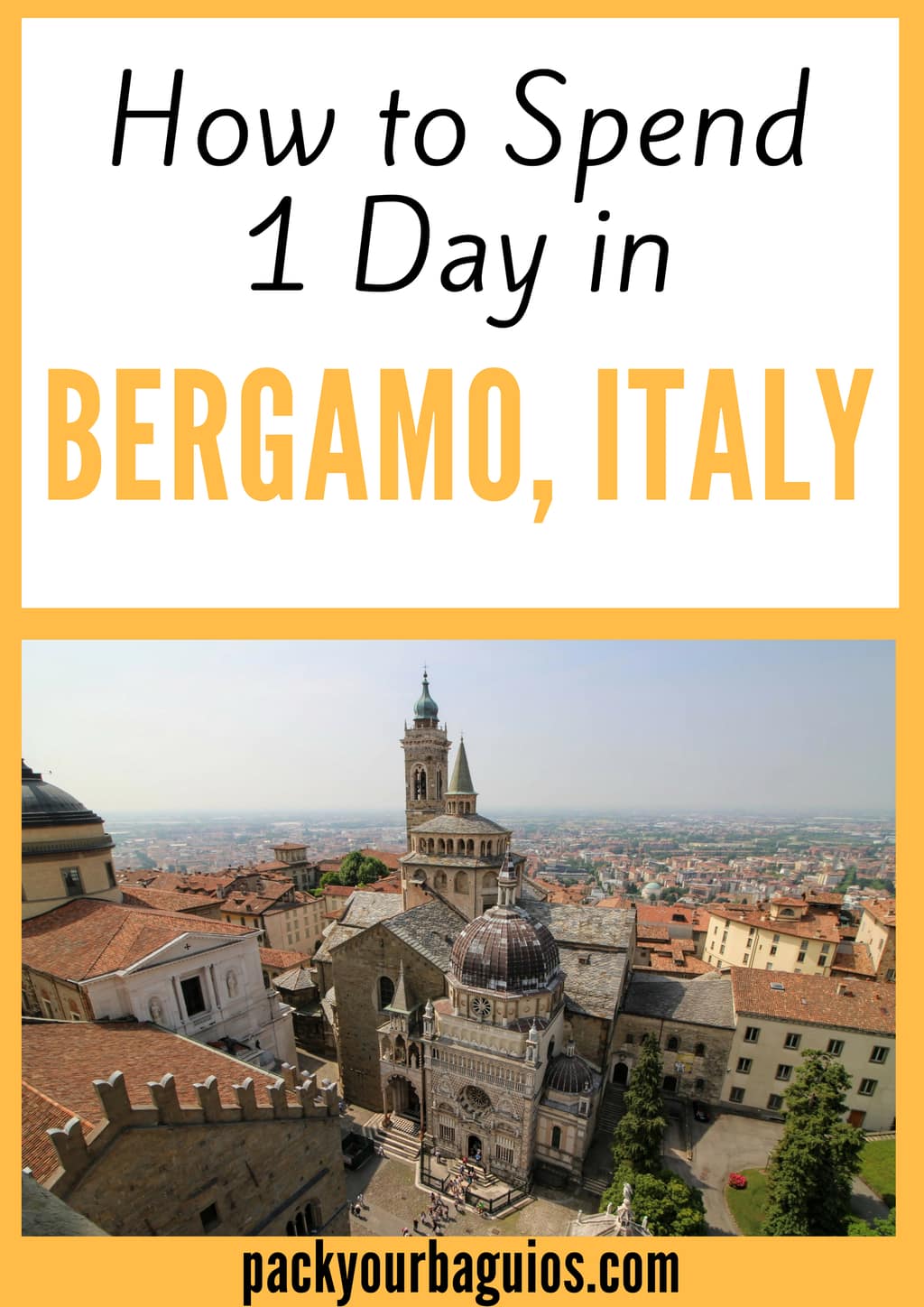 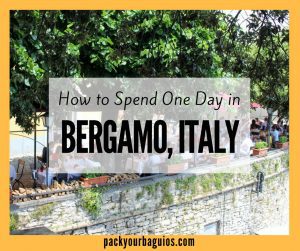 Bergamo is an eastern Lombard town located about an hour’s drive (1 1/2 hours by train) from Milan.  Situated at the foot of the Orobie Alps, it is a baroque and Renaissance lover’s paradise.  Divided into Upper and Lower Town, there’s something to do for everyone.  One step on the ancient hilltop of Città Alta (Upper Town), and you are transported back to Medieval times with cobblestoned streets, cathedrals, and a castle!  Being so close to Milan, it makes for a perfect day trip, and the old town can easily be toured in 1 day.

We recently went to Bergamo as one of 3 day trips from Milan (Read How to Spend 2 Days in Milan, Italy).  The slow-paced town was a nice contrast to the crowds and busyness of the big city.  To see how we spent all 5 days of our trip to Northwestern Italy see 5 Days in Northern Italy. 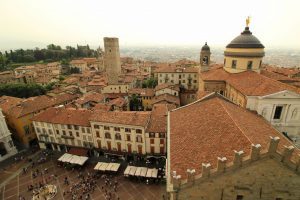 The Nº1 Bus will take you to the funicular to the Città Alta (Upper Town).

What to Eat in Bergamo

Of course you have to sample all of the Italian staples like gelato, pasta, and pizza.  That’s a given!  You’ll also see lots of different risottos.  In Northern Italy, risotto is more of a local favorite than pastas.

Particularly in Upper Town Bergamo, polenta (made with corn flour) is found on almost every street corner.  When I read that the “must try” dessert in Bergamo was made with polenta, I have to admit that I was a bit skeptical.  I’m so glad I mustered up my tasting courage and bought a pair of polenta cakes (polenta e osei).  It’s hard to describe because it is unlike any dessert I’ve had before.  Think sponge cake with a creamy surprise inside like – Twinkies, but 100 times better!  The sponge cake is covered with yellow marzipan, then dusted with crystals of yellow sugar. The little birds placed on polenta are made from marzipan covered with a layer of chocolate.  Stuffed inside the sponge cake is a chocolate/rum/buttercream burst of goodness! 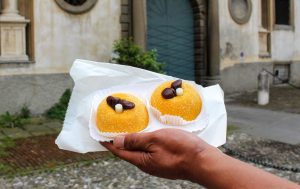 These little cakes were €3 a piece. Joe and I had one apiece, but they were so rich and sugary, splitting one would have been better.

When you first get off of the funicular, you’ll instantly see why we spent our entire day exploring this ancient part of Bergamo.  Città Bassa (Lower Town) is more modern and residential.  If you only have a day, use all of your time for Città Alta (Upper Town).

Like most Italian cities, the best way to explore Città Alta is just to wander around. 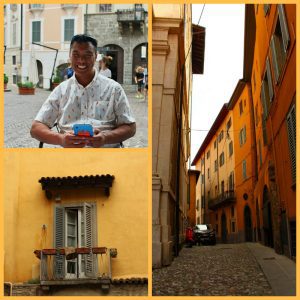 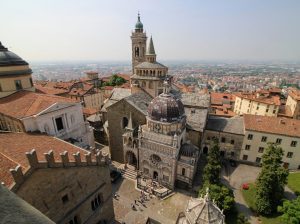 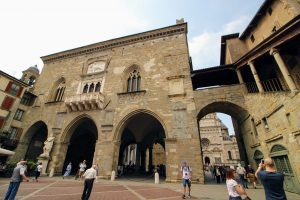 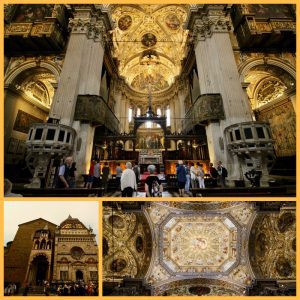 Basilica di Santa Maria Maggiore, as beautiful inside as it is outside 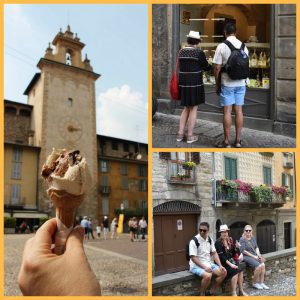 Enjoy strolling up the Via Colleoni and indulging in a gelato at the Piazza Citadella!

Continue walking across the Piazza Citadella through the old city gates to the Funicular San Vigilo.  If you bought the 24-hour bus pass, the funicular won’t cost you anything extra.  The funiculars run every 15 minutes.  We were happy that we had arrived at Bergamo early, because the funicular line started getting long towards the end of the day. 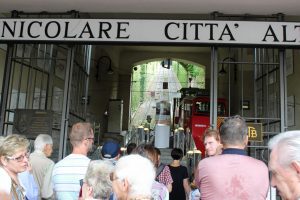 Take a second funicular up to even more spectacular views!

There’s not a lot to see in San Vigilio, but it was a perfect place to enjoy a late lunch with amazing views.  There are several cafes right when you get off of the funicular.  Walk up the hill (on the righthand side) to the Castello di San Vigilio (San Vigilio Castle).  There isn’t a cost to go inside the castle towers to see the expansive view from on top of the castle walls. 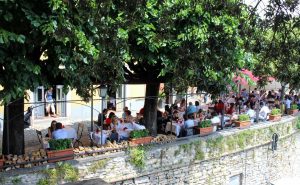 San Vigilio- a great place for a late afternoon lunch! 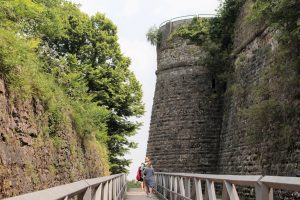 Walk up to the Castello di San Vigilio and take the tower stairs for breathtakingly beautiful views! 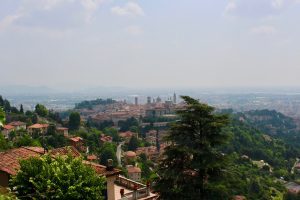 Taking an additional funicular was definitely worth the extra time out of our day with fantastic views of Città Alta (Upper Town)!

Have you been to Bergamo, Italy before?  We’d love for you to add your thoughts and recommendations.  Have any questions? Please ask by commenting below!  Keep up with all of our travel, camping, and cycling tips by following us on Facebook, Instagram, Twitter, and Pinterest.  Leave us your email (blue box at the bottom of the post) to subscribe to our weekly newsletter and never miss a post! 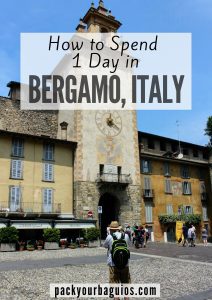