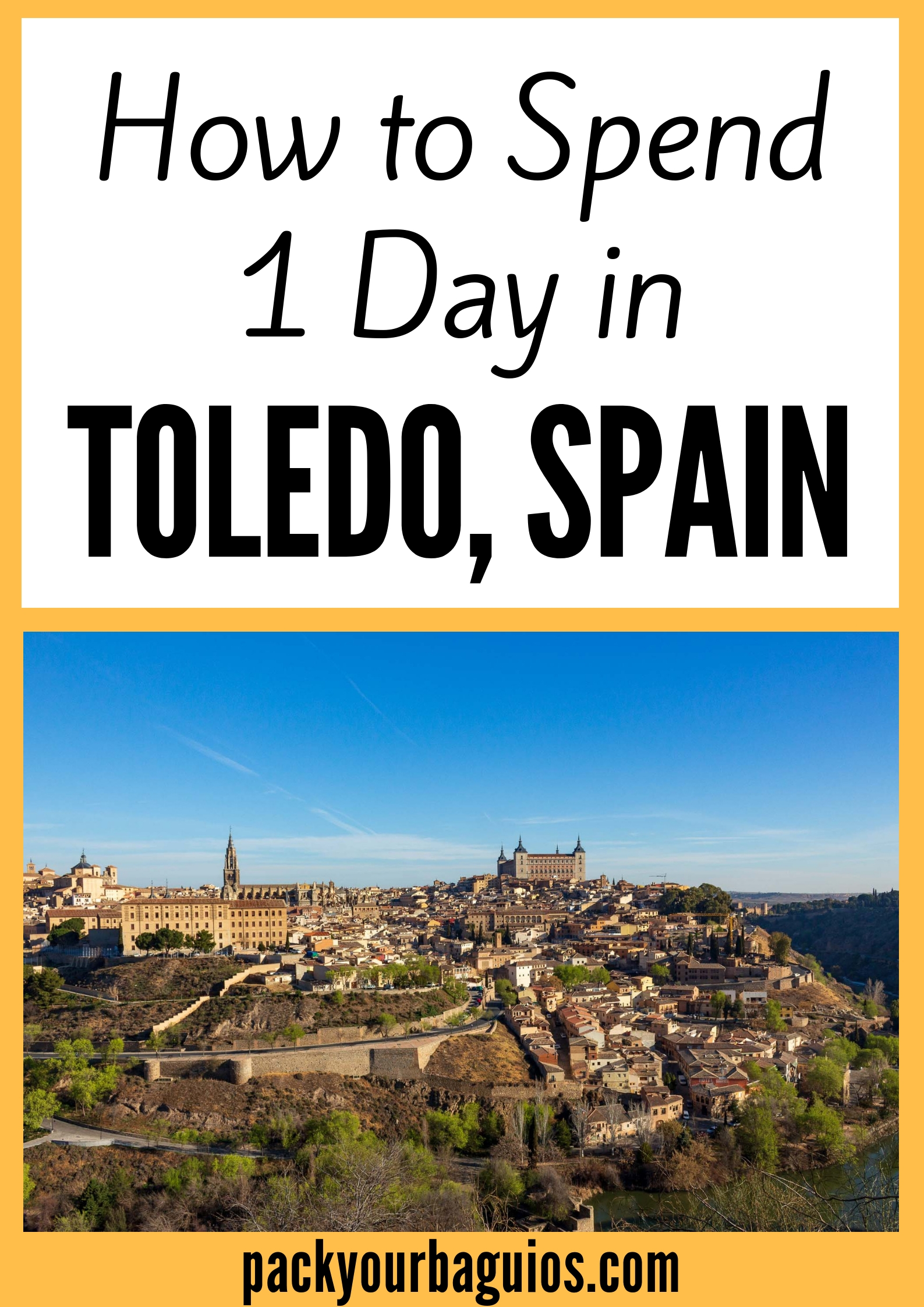 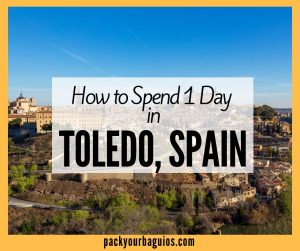 Toledo is an ancient Spanish city that is located southeast of Madrid.  You can easily get to Toledo from Madrid by train in less than an hour, making it an easy day trip from the nation’s capital city!  Toledo is known for its medieval architecture with Arab, Jewish, Christian, and Ancient Roman influences.  Known as the home of El Greco during his later years, the city was the subject of many of his paintings.  If you use our suggested itinerary, you can easily see all of the major Toledo attractions in 1 day.

You might also want to read What to Eat & Drink in Spain.

How to Spend 1 Day in Toledo, Spain 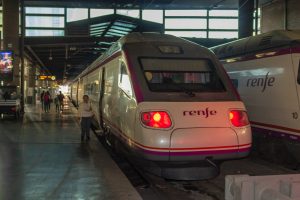 Fast Train from Madrid to Toledo

Bus- The bus departs from near the front of the train station (walk out of the station up to the street on the right side).  There is a bus stop at the Plaza de Zocodover, which is at the Toledo old city center. This is the last stop and everyone has to get off the bus here. The numbers of the buses that go there are 5, 5D, 51, 61, and 62.  The price €1.40 euros and one has to pay the driver.  If you don’t have exact fare, the driver will give you change.

City Hop-on Hop-off Sightseeing Bus-  We elected to take a sightseeing bus to get a good overview of Toledo.  One of my major goals was to get a good photograph of the city from the overview (Mirador del Valle).  From the train station, this is the bus’s 2nd stop, and the driver gives you 5 minutes to take pictures.  The total tour time of the bus is 50 minutes. During that time you’ll get a detailed narrative of the main Toledo attractions (you can choose from 12 languages).  When you want to “hop” back on the bus again, the next bus will arrive in 30 minutes.  On our trip, we elected to buy the “Cathedral Skip the Line” pass which included 24-hours hop on hop off the bus, entrance to the Alcázar Palace, and an excellent guided tour of the cathedral for around €38.   City Sightseeing Hop-on Hop-off Bus

Mirador del Valle (Viewpoint of the Valley)-  No trip to Toledo would be complete without a trip to this scenic overview.  Most tourist busses stop here, and if you tell a taxi driver, “Take me to the viewpoint of the city,” they will know exactly where to go.  This spot was featured in many of El Greco’s painting like the one below. 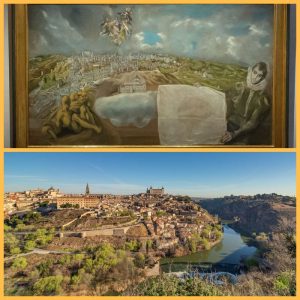 How does El Greco’s painting compare to my photograph? 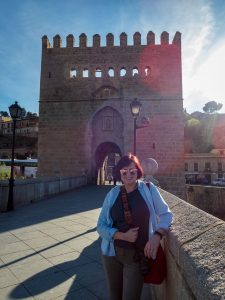 Puente de San Martín (a medieval bridge across the Tagus River)  This 14th century bridge is another perfect place to take pictures of Toledo.  The structure itself is impressive and is flanked on both sides by medieval towers.  From this vantage point you can also watch people zip lining across the river, or if you’re up to the adventure, you can zipline yourself for €10.  If taking the City Sightseeing Bus, this is stop #7. 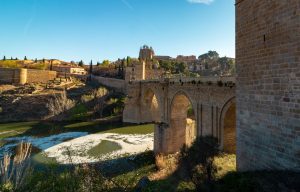 Monasterio de San Juan de los Reyes   After crossing the Puente de San Martín, the Monasterio de San Juan de los Reyes is located just a 6-minute walk into Toledo.  Be forewarned, it is a very steep 6-minute walk!  The monastery was founded in the 15th century by King Ferdinand II and Queen Isabelle to celebrate the birth of their son, Prince John, and their victory at the Battle of Toro.  Admission is just €2.80! 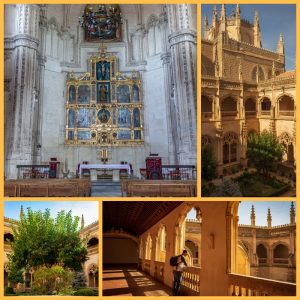 Museo del Greco (El Greco Museum)  Continuing walking another 6 minutes southeast, is little gem of an art museum.  There is a restored house, that apparently wasn’t El Greco’s home, but is a similar design to where he lived.  The museum doesn’t have El Greco’s most famous paintings.  Those are in Madrid, but it does have a nice collection.  Closed Mondays.  Posted cost €3, free on Saturdays after 2pm and Sundays.  However, we were visiting on a Tuesday and didn’t have to pay anything.  Many online reviews also stated that it was free.  After visiting the museum, spend some time wandering around this area of Toledo which includes the Jewish Quarter. 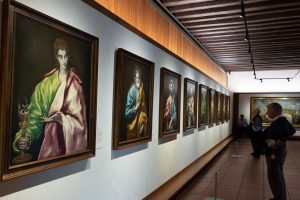 Santa Iglesia Catedral Primada de Toledo (Toledo Cathedral)  Continuing walking about 8 minutes east is the Toledo Cathedral.  Toledo is known as Spain’s leading Catholic city. This magnificent cathedral is one of 3 Spanish cathedrals built in the High-Gothic styles and is considered by many to be Spain’s most significant.  The building of the Cathedral began in 1227.  The exterior isn’t that impressive compared to other European cathedrals, but the interior will blow you away! (€10 including audio tour, €12.50 includes a trip up the bell tower-at assigned times) Tickets are sold in a shop opposite the church.  As with most European churches and cathedrals, modest dress is required. 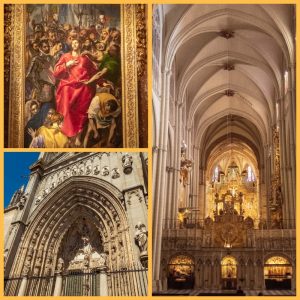 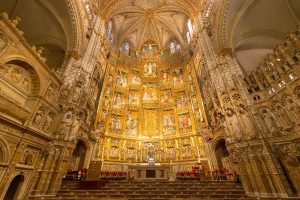 The glorious altar and retable of the Toledo Cathedral

Alcázar de Toledo (Army Museum) Another 8-minute walk east is the massive Alcázar.  Located on the highest hill in Toledo, the Alcázar was once used as a Roman palace.  You could easily spend several hours touring this expansive military museum.  It has the usual military uniforms and weapons, but what we enjoyed the most was the thorough Spanish history explained in chronological order (Spanish and English information plaques)  Open Thu-Tue 10-5pm, closed Wednesdays. €5 or €8 with entertaining 2 hour audioguide. It’s free to enter temporary exhibits and archeological ruins.  Just ask for a pass at the ticket office. 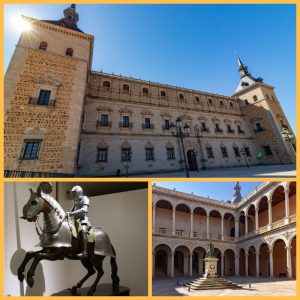 Have you been to Toledo, Spain before?  We’d love for you to add your thoughts and recommendations.  Have any questions? Please ask by commenting below!  Keep up with all of our travel, camping, and cycling tips by following us on Facebook, Instagram, Twitter, and Pinterest.  Leave us your email (blue box at the bottom of the post) to subscribe to our weekly newsletter and never miss a post! 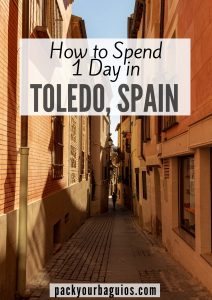