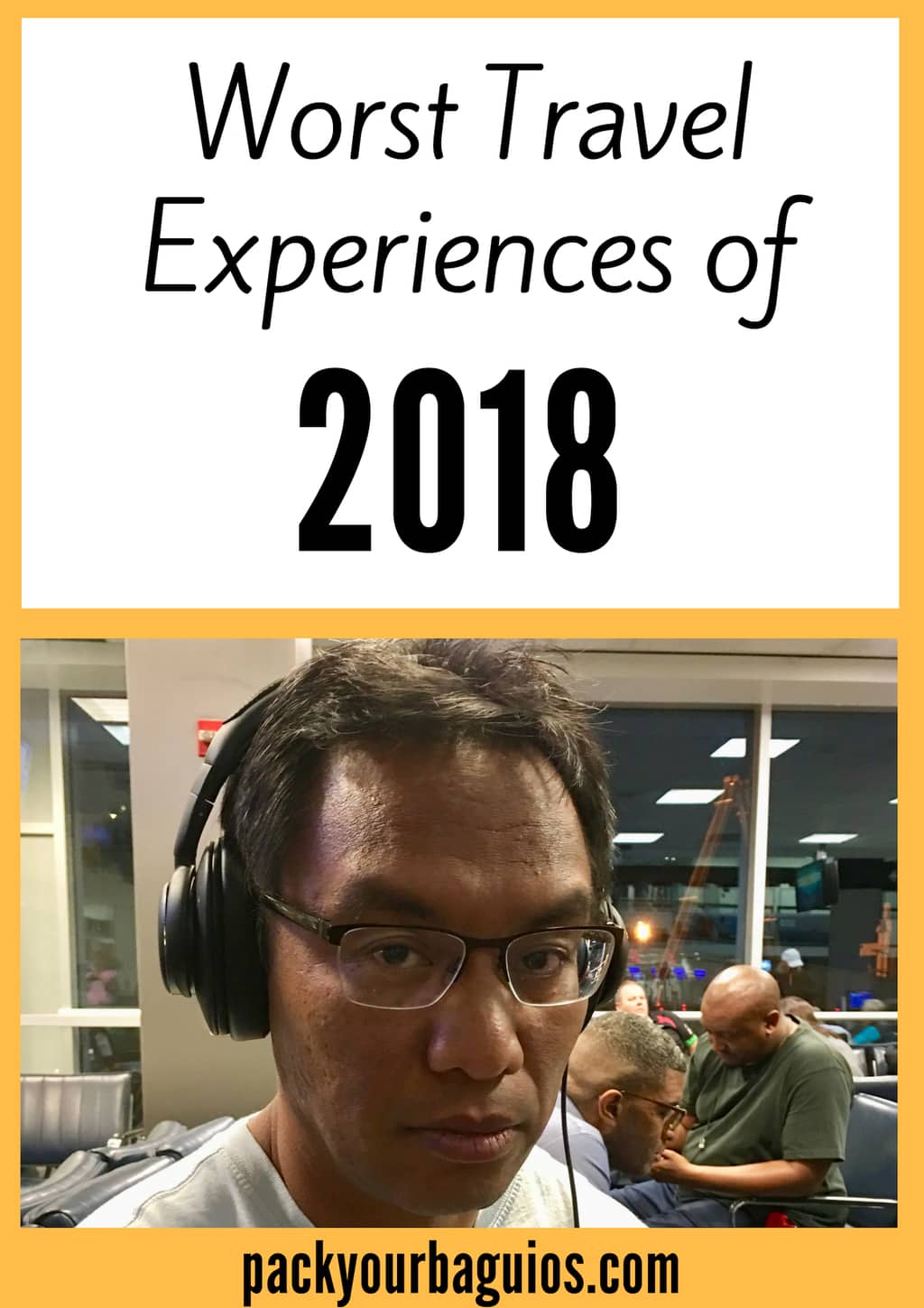 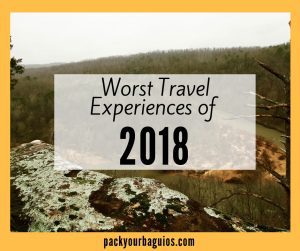 2018 marked the 3rd year of our “Pack Your Baguios” travel blog and 7th year of us being married.  You would think that after numerous road trips, camping expeditions, and overseas travel, we’d have the whole travel thing down so smoothly that every adventure would be one long “Instagram-perfect” memory after another.  Well, our Instagram may be aesthetically pleasing (see for yourself @packyourbaguios), but some of those shots are a lot more beautiful that the story behind what it took to get them.  The key to our marriage is to cherish the happy times and laugh (or cry) together during those inevitable bumps that go with life.  Life would be a lot less stressful if we stayed at home more often, but then again, it would be a lot less memorable too.  Here’s our worst travel experiences of 2018!

The hike to nowhere.

I have 2 experiences that really stand out.  The first happened at the end of our Easter trip to Eureka Springs, Arkansas.  To set the scene, the end of March had been a very cold, rainy weekend.  At that particular time, I was on a “find a waterfall” kick and had read about a nice waterfall only an hour out of our way.  After a long drive through Deliverance country, we finally found the trailhead.  First we hiked to the overlook, which I must admit, was spectacular! 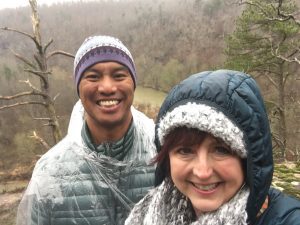 Finding the overlook, but not the waterfall.

Then according to my vague directions, the waterfall should have been about 1/2 mile from the overlook.  Well, we hiked, and hiked, and changed directions and hiked some more.  After about an hour of wandering aimlessly around in the cold rain, I was ready to give up.  Joe, ever the adventurer, thought otherwise!  He told me to wait, and he would run ahead and see if he could find the elusive waterfall.  I waited for about 20 minutes.  No Joe!  Being “the glass half empty” kind of person, my mind started to picture Joe at the bottom of a ravine.  I waited some more.  Still no Joe and no cell service to call him. Eventually he had been gone so long that…well…I had to pee!  I gave him 10 more minutes before I found a lovely place in which to pee in the wet, cold woods.

Finally,  I had to make a decision.  Do I hike back to the truck to go and get help or stay where I was?  After remembering that Joe had the keys to the truck, I started to cry.  It was while I was uselessly crying in the rain, that – like a lost dog – Joe gleefully scampered back.  He didn’t find anything, but was eager to head off in another direction to find that stupid waterfall.  He had no idea that he had been gone almost an hour.  Men!!!

On the scene of an accident.

This past fall, we were visiting my youngest daughter, Rachel, in Northwest Arkansas.  The fall colors were at their gorgeous peak, so instead of taking the interstate back home, we decided to take the scenic route – the beautiful, but curvy Highway 71.  There’s a spot on Highway 71 called “Artist Point” that has a beautiful overlook.  We stop there when we can to take pictures and go in the nearby gift shop. 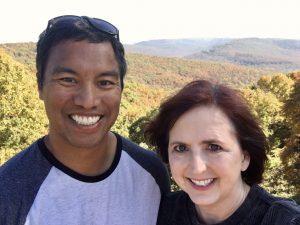 As we were taking pictures, motorcycle after motorcycle went flying by.  We even remarked to another photographer, “Somebody’s going to get hurt.”  Right after we took the above selfie, a Ferrari zoomed in front of us, followed by a truck, and 2 more motorcycles.  However, the truck wasn’t a part of the corkscrew-race down the highway.  It was actually stopping at the overlook.  We watched as one of the motorcycles skidded into the back of the truck, throwing the motorcyclist high into the air – a sight I will never get out of my head.

Joe quickly ran to flag down other motorists before any more vehicles were involved in the crash while I ran over to the cyclist.  I learned his name was Christian.  His femur was completely broken to the point that it was at a right angle from the rest of his leg.  Luckily, his head was protected with a helmet.  He was trying to get up, but we did our best to keep him calm and from moving.  The other motorcyclist was a friend and called for help, then called Christian’s family.  Because we were in the middle of the mountains, it took almost 40 minutes for an ambulance to arrive, but in the meantime, I was joined by an off-duty deputy and a nurse.  I never found out what happened to the motorcyclist, but Christian, I still think about you and say a prayer for your complete recovery. 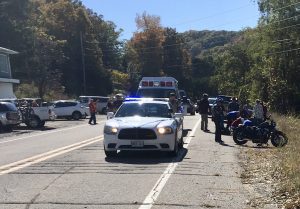 The scene after the police finally arrived. 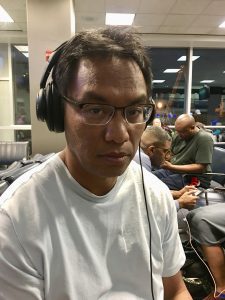 I just love delays at the airport!

This past fall break, we flew to Texas to visit friends at College Station and to spend a few days in San Antonio.  To fly back home, we first had to fly from San Antonio to Houston.  Due to some bad weather, our connection in Houston was delayed 2 hours.  I know that doesn’t sound that bad, but the fun was just beginning!  After we boarded the plane, we had to sit on the tarmac for another 45 minutes for “mechanical” issues.  The flight from Houston to Memphis isn’t that long, so we weren’t too concerned with the delays.  I had even texted our house/cat sitter that we were off schedule, but to go ahead and lock up, and she could give me back the key later (remember this, it’ll come into play later).

When we finally arrived in Memphis, we were only about 3 hours off of our schedule.  However, our plane didn’t go to the gate.  Again, it just sat on the tarmac–for an hour!!!!  Apparently our gate “bridge” was broken and another gate wasn’t available at that late hour.  Eventually, we were able to get off of that stinking’ plane. It was muggy, we were tired and claustrophobic, and it was now 11:00 PM.  The Memphis airport isn’t known for its efficiency, so getting our bags added an additional hour.  The drive from the airport to our house took its usual 30 minutes.

Sound like just a typical day of rough travel? Well, hold on to your hats because unbeknownst to us, more fun is yet to come!

When we arrived back at our house, Carmen and I both sighed a big relief to be home.  Now when we normally leave our house we never lock the door between the garage and the house, but we always keep our garage door closed.  This is because we have our garage door opener to enter and leave the house.  Do you remember the tidbit about me telling the cat sitter she could just give me the key later? After parking the car in the garage, we tried to open the house door and found to our dismay that it was locked.  Our cat house sitter was too good and had made sure that every door and window was locked before she left.  And you guessed it – neither Carmen or I had a house key!

It was now around 1 AM.  I threw on a jacket as the night frost cooled the air, and decided to shimmy up to the top of our gazebo to one of the upper floor bedrooms to see if was unlocked.  No such luck!  We brainstormed and weighed our options as follows:  1) call the cat sitter who had a key  2) sleep in the car  3) drill out the door lock of the garage door  4) bust the garage door window or 5) leverage the upper bedroom window-sill latch to gain entry.  Granted we were weary, tired, cold, and we were definitely not thinking clearly.

First, we called the cat sitter.  She didn’t answer (found out later, she was deep asleep).  Next, we decided to drill the door deadbolt, and after 15 minutes and several broken drill bits, we weighed our remaining options.  Let’s break the garage door window!  We put duct tape in an X across the window to minimize shattering.  I took a couple of hard smacks with a hammer I scrounged from somewhere in the garage and…it did not crack.  Were we that tired and weak or was the builder of our house just really paranoid?? I never thought I would be so upset that our house was this hard to break into. 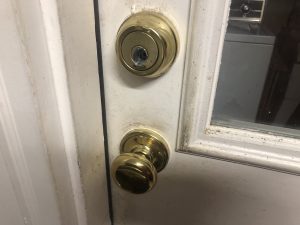 We couldn’t break into our own house!

Ignoring the fact that I would look like a burglar to all of our neighbors, I decided to climb back up to the upper floor window with a 6-foot long pry bar in hand.  Success!!!  I was able to pop off the window latch screws that secured the latch.  After feeling like the 2 bad guys from Home Alone, it gave us pause to think a very persistent thief would be able to mimic our break-in.  So much for our neighborhood watch!

Not all of our posts have as many page views from our readers as others.  Want to show them some appreciation?  Give these posts a click! 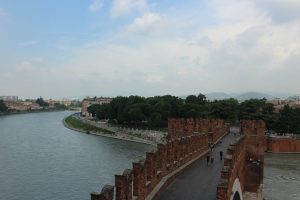 View from Castelvecchio in Verona

#4- One of the most unique places in the world! The five villages of Cinque Terre, Italy. 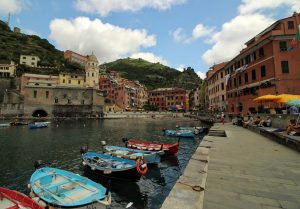 The harbor in Vernazza

#3- Want to see Venice and throw in some day trips (plus see a cool travel video)?  Click on 4 Days in Northeast Italy: Veneto Region!

#2- One of the most picturesque places we’ve ever been!  See for yourself by reading How to Spend 1 Day in Murano & Burano, Italy. 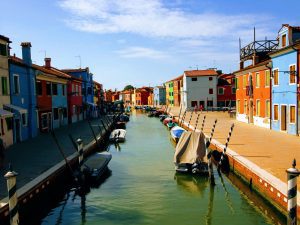 Burano’s canals are lined with colorful shops filled with handmade lace to buy.

Have you had any “travel worsts” this year?  We’d love to hear so we can laugh (or cry) along with you! Please share by commenting below!