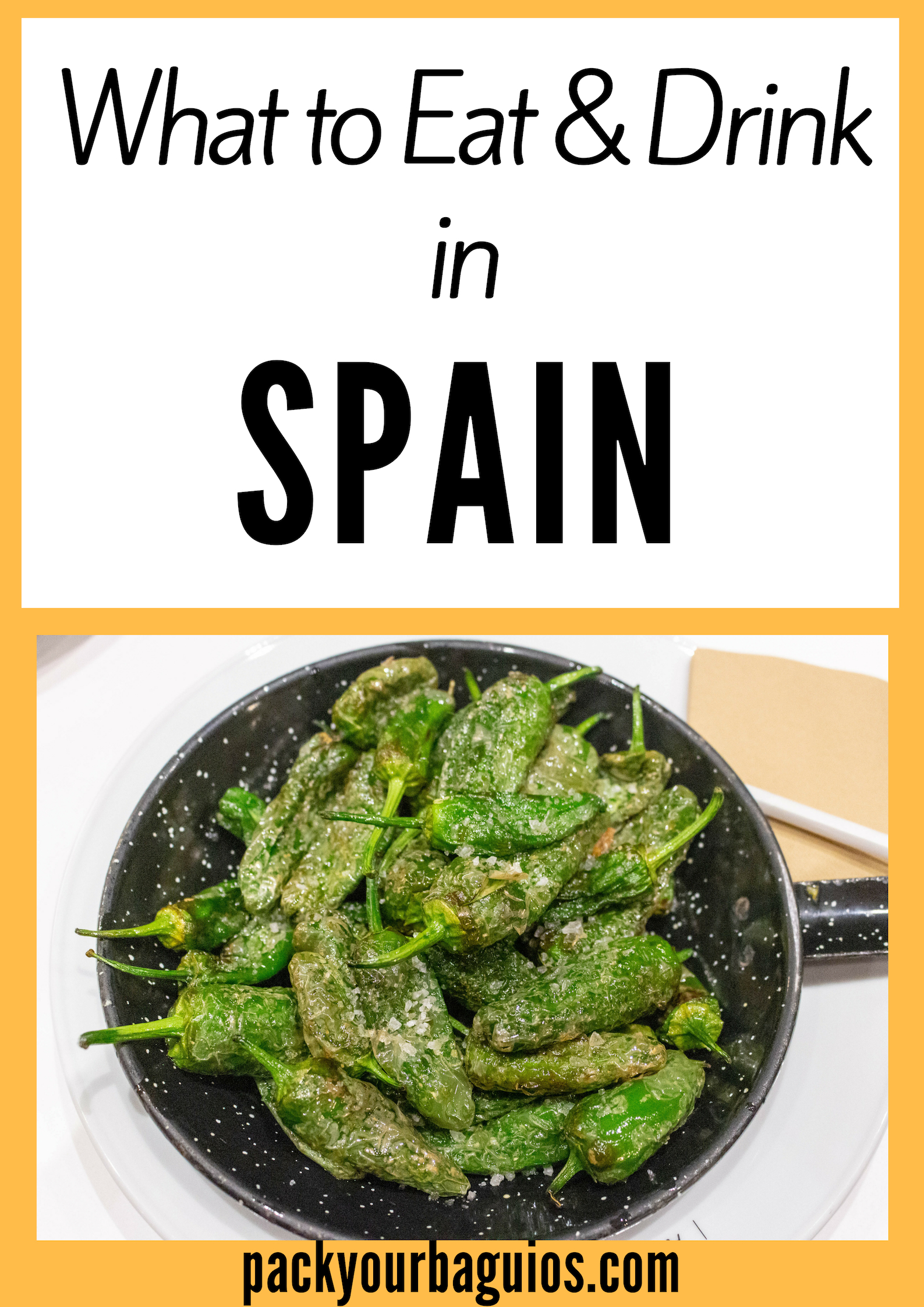 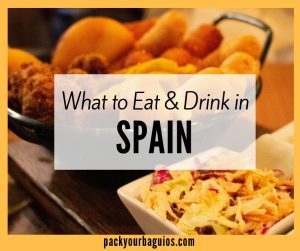 When planning a trip to Spain, what to eat and drink should be included in your itinerary!

Throughout its varied history, the Iberian Peninsula had adopted and adapted different cultural aspects from the civilizations that conquered it.  The Romans brought mushroom-inspired cuisine.  When the Greeks and Phoenicians colonized the area, grapes (wine) and olives were introduced.  Spain is now the biggest producer of olive oil in the world!  The Moors introduced the Spanish to Persian and Indian spices and cooking techniques.  Explorers to the Americas came back with potatoes, tomatoes, and corn.

All of these influences have combined to create a cuisine that focuses on small dishes for sharing, hearty dishes to provide substance in the winter, and above distinct, delicious flavor! 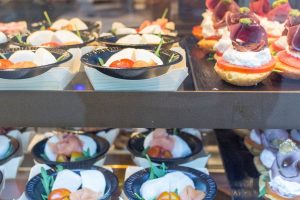 Just one of the numerous, mouth-watering tapa displays at Madrid’s Mercado San Miguel

What to Eat  in Spain

Almonds are fried in olive oil then sprinkled with salt.  A typical pre-dinner tapa, almendra fritas are often accompanied with a plate olives and a nice, cold beer. 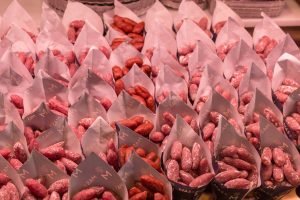 As a big time lover of calamari, the abundance of this dish found all across Spain made my tummy extremely happy!  Calamari is coated with a thick batter then fried in olive olive.  It is served plain with a slice of lemon and sometimes a mayonnaise dipping sauce. 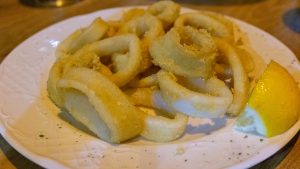 Calamares Fritos- this tapa-sized plate was only €3!

We can thank the Celts for embedding the importance of pork into the Spanish cuisine.  When Spain was overtaken by the Moors, the curing and consumption of pork was an act of defiance by the Spanish people to the occupation of the area by the Muslim practicing conquerors.  Peppers brought back from the Americas were eventually added to meat processing, giving the meats their signature reddish color. 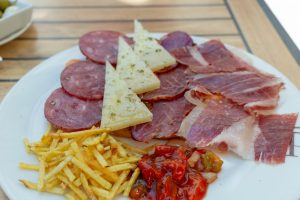 Chorizo is often served as part of a charcuterie board, but it can also be found in other Spanish dishes.  It is made with pork, pork fat, smoked paprika, encased in pork intestine and air-cured.  The red color comes from paprika.  There are hundreds of regional variations all across Spain.

Churros could have been brought to the Iberian Peninsula from China, or shepherds may have used  them in place of fresh bread.  The pastry is frequently eaten for breakfast with sugar sprinkled on top, but we saw several savory churros listed on restaurant menus.  In Seville, I had to try the prawn-stuffed churros! 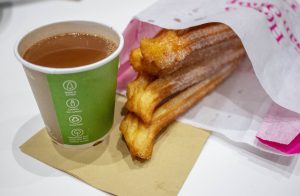 Churros are often paired with a cup of Spanish hot chocolate (dip the churros into the fudgy goodness).

Croquette first were created as a way to use every bit of leftovers because you can use any meats, seafood, or vegetables.  Although croquettes can be found all over the world, when in Spain you have to try their croquettes stuffed with ham.  The batter used in Spanish croquettes is a thick béchamel sauce.  They are so good, I don’t think I would ever get tired of eating them.  Mana from heaven! 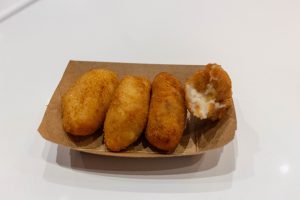 A specialty of Seville in the Andalusia region, we saw it served not only as a stew, but also as a dip with bread. 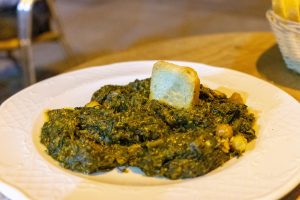 Typically served in tapas bars, gambas al ajillo is a dish of prawns cooked with olive oil and seasoned with garlic, green chili, and parsley (see pictured below with tortilla Española).  It most commonly found in central and southern Spain.

Gazpacho- cold soup made up of various vegetables

Cucumber and tomato are a popular combination.  The cold, refreshing soup originated in southern region of Andalusia and was brought to that area when the Roman’s invaded.  It is typically served in the summer. 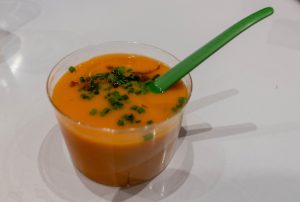 Spain is the world’s number one producer of air-cured ham.  This highly regulated product is still made using century-old techniques.  The pigs are only fed acorns during their last winter and must be free range.  This produces a meat that is beyond flavorful.

The pigs themselves date back as long ago as 900BC!  Christopher Columbus even took the cured pork to help his crew stay nourished on their long journey across the Atlantic. 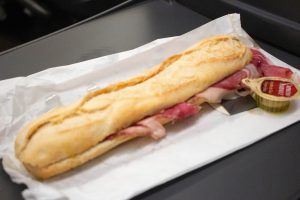 These sandwiches can be found all across Spain.  This particular sandwich was enjoyed while we were waiting at the Toledo train station.

Brought to the Iberian Peninsula by the Phoenicians and the Greeks, olives have been growing (and thriving) in southern Spain for over 3 thousand years.  Then with the introduction of middle eastern cuisine by the Moors, olives and olive oil became a mainstay of Spanish food. 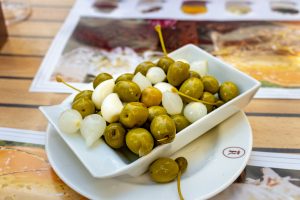 Olives are often served as an appetizer before the “real” appetizer.

One of the most iconic of all foods from Spain, paella originated in Valencia (eastern Spain).  Rice was brought by the Moors 1200 years ago.  Paella got its start with farm laborers who would cook rice and whatever else was on hand over a wood fire for their mid-day meal.  Today, paella is still cooked over a fire in a tradition paella pan. 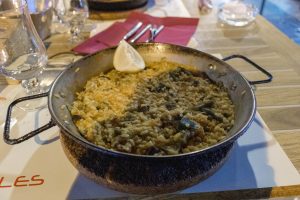 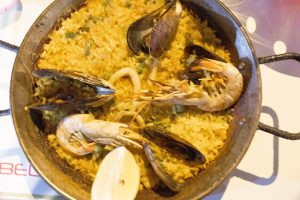 Patatas bravas are little irregularly-cut potatoes that have been fried in olive oil.  The potatoes are then coated with a spicy tomato sauce and sometimes a garlic mayonnaise.  One of the most common tapas you’ll find in Spain, and each region has their own variation. 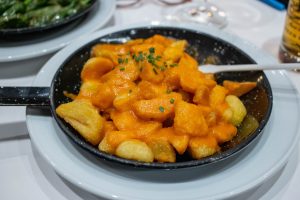 Our patatas bravas were served piping hot, and the tomato sauce was so delectable, we scraped the pan for every last drop!

Legend has it that Spanish monks brought the peppers to Spain from South America then planted the seeds near the town of Padrón.  Today, cooks fry the green peppers until the skin starts to blister.  Then the peppers get a sprinkle of lemon juice and salt. 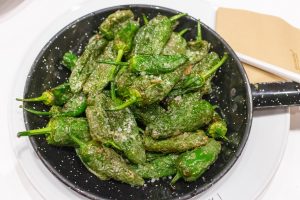 Rabo de toro came to Spanish food from the  Andalusia region, specifically Córdoba.  It was traditionally made after bullfights.  The meat is cooked slowly with low heat until it is so tender, it literally melts in your mouth! 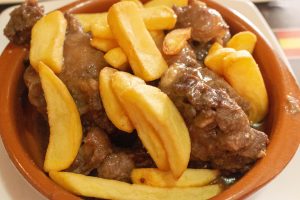 Rabo de Toro- my favorite meal of our last trip to Spain!

Tapas are small appetizers or snacks that originated in Andalucia.  The name came from a bartender’s practice of covering a glass with a saucer or “tapa” (cover) to keep the flies off of the food.  Legend is that King Alfonso the 10th became ill and could only eat little portions of food with small amounts of wine.  When he recovered, he declared that inns could only serve wine unless the drink was also accompanied with food. 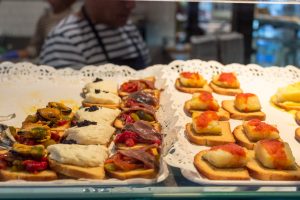 These tapas ranged from €1-2 each.

Tortilla Española- omelette made with eggs and potatoes

When I think of an omelette, I picture Joe cooking me up an egg mixture filled with green pepper, mushrooms, cheese, and onions, usually for breakfast.  In Spain, the tortilla Española is served in most bars and restaurants as a tapa.  The basic entrée is made with only eggs, potatoes, and sometimes onion. 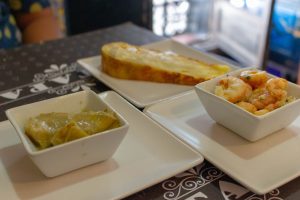 What to Drink in Spain

Spain is one of the greatest wine producers in the world.  Try different types of sherry in Jerez de la Frontera in Andalusia.

The history of sangria can be traced back as far as 200BC.  Different fruits and spices started to be added to give some variety in taste.  A traditional sangria is made with wine, fresh fruit, brandy or rum, and a sweetener.  This is by far the most popular drink in Spain served at every bar and restaurant. You can order by the glass or enjoy a pitcher. 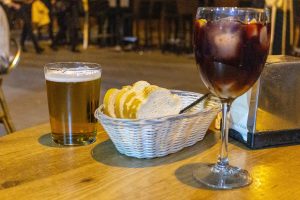 Our typical nightly drinks while in Spain- beer for Joe and sangria for me!

Which of these foods and drinks have you tried or want to try?  Please share by commenting below!  Any questions?  Please ask!

We would love to hear any other Spanish restaurant tips or recommended foods and drinks!

PLEASE PIN ME FOR FUTURE REFERENCE! 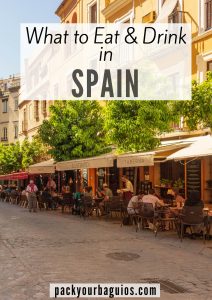